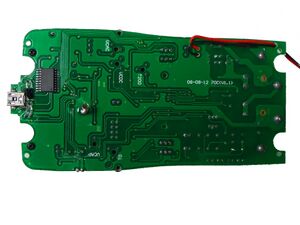 Many digital multimeters made by Victor share the same protocol. At least the Victor 70C and Victor 86C support this protocol. In the 70C this is generated by a chip inside the device, on the 86C it's in the cable.

The device registers on the USB host as a HID-class device ("Boot Interface" subclass), see lsusb.

The protocol payload is 14 bytes of data which can be read from endpoint 1, at no more than 1 Hz. The 14-byte chunk is somewhat obfuscated. To deobfuscate, subtract the ASCII value of the following string from each of the 14 bytes in turn: jodenxunickxia. Then reshuffle the bytes into different positions, according to the following table:

The (still slightly obfuscated, see the comment below the table) payload is then structured as follows:

After this, reversing each bit in a byte, and each byte in the packet yields the original DMM packet that entered the Victor cable. For Victor 70 and Victor 86 meters the layout is that of the Fortune Semiconductor FS9922-DMM4, a common digital multimeter chip with its own protocol.