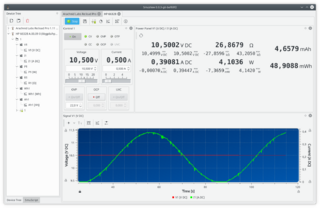 SmuView (sometimes abbreviated as "SV") is a Qt based GUI for power supplies, electronic loads and all sorts of measurement devices like multimeters, LCR meters, scales and so on.

Please have a look into the SmuView manual for a lot more information about all the available features and functions.

The continuous release is a development snapshot of SmuView but is the recommended and always up-to-date download.

The Windows installers require Windows XP or higher and can be found here.

The macOS DMG is 64-bit x86 only and requires macOS 10.13 High Sierra or higher and can be found here.

The installers require Windows XP or higher and are available for 32-bit and 64-bit.

The macOS DMG is 64-bit x86 only and requires macOS 10.9 Mavericks or higher:

You can also browse the source code via github.

It is known that for controllable devices (like power supplies) a mutex has to be added in the corresponding libsigrok driver. If that mutex has not been added, you will notice the following behavior:

These power supplies should work:

All other power supplies probably don't work. Please get in touch via github to add support.

These electronic loads should work:

All other loads probably don't work. Please get in touch via github to add support.

The following measurement device types should be supported:

This devices aren't supported yet, but maybe will be in the future:

SmuView has a python scripting extension to automate, setup and control complex or repetitive measurements, to process the incoming data and to create a standardized user interface for those measurements.

The API documentation can be found here.

The following short example connects the HP 3378A DMM via GPIB, reads a sample and creates the default tab for the device:

See Linux#SmuView (or any other of the OS-specific instruction pages).