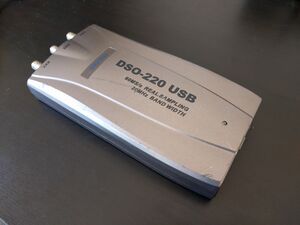 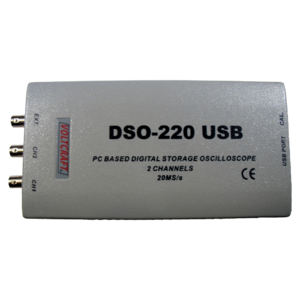 The Hantek DSO-220 is a USB-based, 2-channel oscilloscope with an analog bandwidth of 20MHz and 60MS/s sampling rate. It was sold under the Hantek and Voltcraft brands and possibly others: Hantek says on their website that "DSO-220 USB ... is mainly exported to America, Europe and many other developed countries through ODM pattern."

There were two versions of the hardware produced, requiring different firmware versions but re-enumerating to the same USB PID. I suspect, but cannot confirm, that a unit's hardware revision is indicated by the style of its case:

Nearly all information on this page is taken from the unit photographed below, which takes 5.x firmware. (I have tried loading 3.x firmware onto it, and it re-enumerates properly, but I have not tested anything beyond that.) The 3.x and 5.x firmwares have significant code differences, judging by a cursory disassembly of them, so it's possible that the innards of 3.x units are quite different as well. Firmware can be extracted from drivers in the same way as for other Hantek scopes (see Hantek DSO-2xxx/52xx).

The DSO-220 may be closely related to the Hantek DSO-2100. Hantek's website has a single product page for both, and the DSO-2100's firmware is quite similar to the 5.x firmware for the DSO-220, with only a few differing pieces of control flow.

See Hantek DSO-220/Info for more details (such as lsusb -vvv output) about both hardware revisions. Notably, after firmware load and re-enumeration, the PIDs and USB descriptors are identical, indicating that both firmwares speak the same protocol.

The PCB does not look professionally assembled; both my unit and the unit in the mikrocontroller.net teardown linked below appear to have most components, including SMD ones, hand-soldered. There are clear reworks present, with SMD resistors bridging between through-hole pads on the underside of the board.

There is an unpopulated JTAG header for the CPLD labeled J8. Its pinout is as follows:

From continuity testing of the board, I have determined the following: